The Crew West team was up bright and early for Arizona Diamondback’s spring training, the first of many Cactus League spring training teams we will cover this season. This was the first full day of spring training workouts for the team and excitement could be felt everywhere – from the journalists to the fans lining up to see their favorite players. The day began with us, along with Fox Sports 1 reporter Jon Paul Morosi, heading into the players’ locker room so the reporter could speak with the players and get some interviews for his nightly sports package. Later on we waited for the players to come outside and do their workouts on the grass before heading out onto the fields. Our crew went to each practice field getting footage of the players that would be mentioned in the package. The big news that day was that the Diamondbacks had just signed veteran pitcher and free agent Bronson Arroyo. Fans and the media waited patiently for Arroyo to throw his first bullpen session with catcher Miguel Montero that day, while manager Kirk Gibson, pitching coach Mike Harkey and pitching consultant Dave Duncan stood by to watch. During a press conference later in the day, the media asked Arroyo some questions before he was presented his new Diamondbacks jersey from team President Derrick Hall and owner Ken Kendrick. 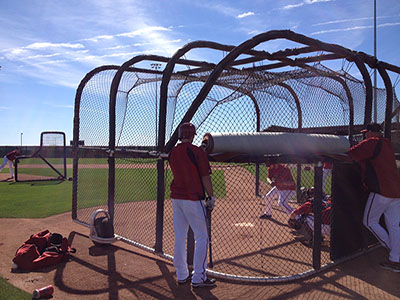 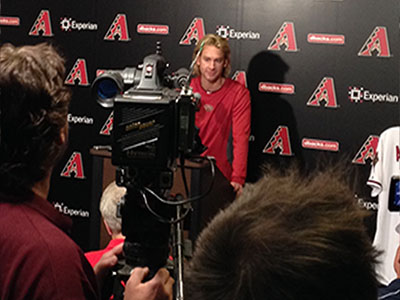