Heading into a new season of spring training in Arizona, the Cactus League Media Day was a whirlwind of challenges mixed with excitement at the same time. Myself, along with three crews from Crew West, teamed up with both MLB Network and ESPN at the Arizona Biltmore Resort to shoot MLB commissioner Rob Manfred speaking live during the press conference. While that was occurring, two other crews were busy setting up a roundtable shoot that included five players who are attending the World Baseball Classic: Adrian Gonzalez, Francisco Lindor, Nelson Cruz, Johnathon Lucroy and Salvador Perez, all being interviewed by MLB Network’s Tom Verducci. I’ve never observed how stressful it can be to set up a shoot with six people total in one shot. With four camera bodies in a small conference room, I was impressed to see how the crews at Crew West made it work and got the job done. We all brought props to use in the background to make the shot look better than what it would have otherwise since the room came with nothing besides a blank wall. Not only did the props have to be in a certain position, it was interesting to see how each shot was angled with perfect lighting on each subject in this interview.
After debuting our shoot with these five players, we set up our one-on-one interview between Tom Verducci and general manager of the San Diego Padres, A.J. Preller. Between these two shoots that needed to be set up in a small amount of time, I learned that small and specific details truly matter along with communication with every crew member who was in that conference room. It was a great challenge to see. With 12 men in a small conference room, they all worked in perfect sync with each other and the job was done successfully!

To top all of our hard work that paid off, we had an unexpected surprise. The sandwiches we ordered at the resort were $257! Who would have known that a dozen of club sandwiches could cost that much?! 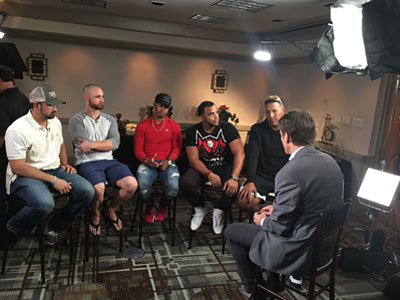 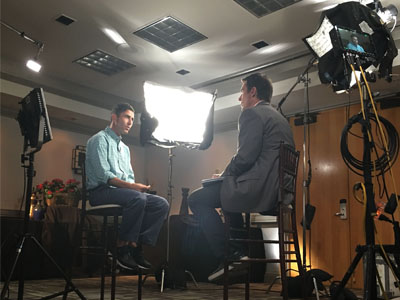