When you sit down to watch a sporting event on your day off, you generally do not think of the sheer amount of work that goes into every aspect of the broadcast.  It is simple entertainment and nothing beyond that.  However, even the smallest things in these broadcasts can require an immense amount of work.  Take for example the little interviews and soundbites that air during the lulls of play during a baseball game.  Most would probably balk at the idea that these short little segments would require around five to six hours to shoot for each team.  However, this is indeed how long it generally takes.  Across the nation, independent production companies are hired by the national networks (such as ESPN) that broadcast professional sporting events to tape these segments.  One of these production companies is Crew West Inc.

Crew West works in tandem with ESPN producers to create a nuanced and artistic element to a small, yet extremely important part of a major baseball broadcast.  For example, take the shoot wherein Crew West teamed up with ESPN to interview a few star players on the Arizona Diamondbacks.  The crew began work early in the morning before the sun even shined in the sky, and went about setting up a professional set with a chain link fence set against a blue/gray backdrop for the interviews.  Here I was able to see the true nature of a professional production; hard and dirty work.  The best I could liken this production to was a construction site, but instead of building a skyscraper we were constructing a piece of art meant to immerse viewers in enjoying their favorite baseball team.  It was quite impressive to see how quickly this entire set was set up inside of an umpire’s locker room where space was tight and hot.  Even more impressive was the players we were able to interview and interact with.  I met and even shook hands with a few of the Diamondbacks major players such as Paul Goldschmidt and Robbie Ray.

The entire experience made me appreciate not only the profession I am in but the ability of the crew from Crew West to work so efficiently under such a tight deadline.  Next time I go to watch a Diamondbacks game I hope to see one of the interviews I partook in and be able to say, “I helped make that a possibility.” 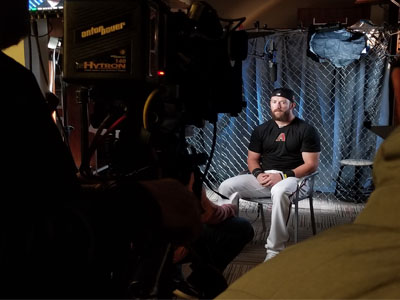