Satelink West is working a backhaul job today for the Los Angeles Angels and Milwaukee Brewers spring training game today in Phoenix. What is a backhaul? To put it simply, getting data to a point from which it can be distributed over a network in the satellite communication world. Parked right outside of Gate B lies our satellite truck hooked up to the broadcast feed coming from the stadium, through the production truck to our uplink truck. From there we split it into a primary and back-up feed. The primary feed is sent to the television network that is broadcasting the game via satellite and the backup remains in the truck on standby in the event of a problem. The crew hooks up and tests everything four hours before game time to ensure all of the moving pieces are working flawlessly.
– written by ASU intern Sydney Schuman 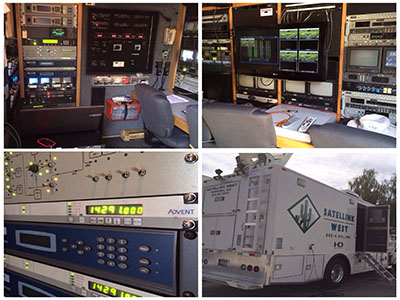