Crew West on the Border 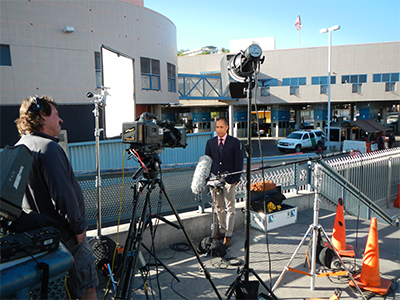 Crew West and Sat West were in Nogales, Arizona and Nogales, Mexico working for NBC covering the story of a American Mormon mother accused of smuggling drugs from Mexico into the United States. We were down there for a whole week shooting live shots from both sides of the border with Miguel Almaguer for The Today Show, Nightly News with Brian Williams, and MSNBC. Crew West had 3 full crews on hand to cover the story including President Jim Farrell, Doug Podkowsky was the audio technician and Mark McKay was in our satellite truck providing the uplink and doing video feeds throughout each day and through the night.