At Camelback Ranch, the spring training home of the Los Angles Dodgers, the media was buzzing about Hanley Ramirez becoming a free agent after this season. On the heels of his spectacular performance last season, Fox Sports 1 reporter Jon Paul Merosi didn’t hesitate to ask Ramirez if he was interested in moving cross country to replace Derek Jeter as shortstop of the New York Yankees. Ramirez “Dodged” that question, but owner Ned Colletti weighed in saying that Jeter had such a big role in New York and that could not be filled by just one person. Coach Don Mattingly also provided an update on Matt Kemp’s status after he sustained injuries to both his shoulder and ankle. The two time All-star is reportedly swinging the bat well and ultimately looks healthy and ready for the season. The clubhouse was booming with positive energy as the team is eager to begin the season.
-written by ASU intern Samantha Koukoulas 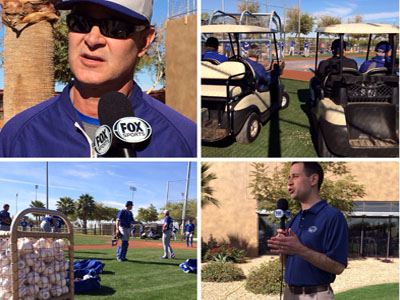