6:00 am sharp on Saturday, Crew West members entered the practice court of US Airways Center for ESPN’s WNBA Championship Trophy promotion shoot, with members of both finals participants, the Phoenix Mercury and the Chicago Sky. Because it was a studio scene with a white background and top lighting, it required many heavy combo stands. The shooting time was scheduled at 10:00 am, but the crew was still not ready after four hours loading and setting. The problem was that the a black duvateen wall of the temporary studio room created a distracting reflection on the trophy, so it had to be changed to a white paper roll. Once the new wall was set, in order to protect the even lighting, the crew had to cut off a little hole in the white seamless paper roll and put the camera’s lens through the hole. This became very frustrating for our Director of Photography, Jim Farrell, to move the camera around in such a limited space. During the confetti shooting, one girl from Chicago Sky was trying to throw confetti while bending down and she planned to stand up again in front of the camera after throwing, but she couldn’t get up and everyone laughed really hard. The shooting became harder again for shooting b-roll of the trophy because the top lighting was reflecting poorly the trophy itself. Our gaffer, Jarrod Wilson, decided to go into the studio and used a white paper to cover himself while hitting the trophy with a small handheld light. The twinkle reflected on the trophy and we were finally able to oce again create the perfect shot. It was another tiring yet rewarding day for the crew.
-written by ASU intern Ao Gao 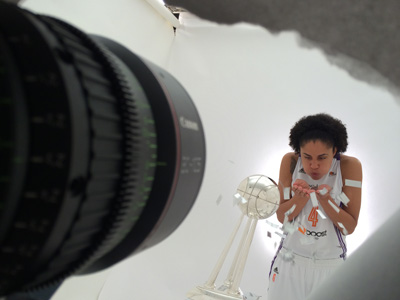