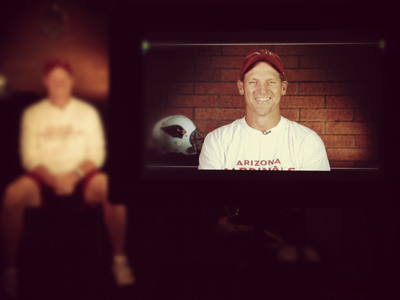 Week 4 of the 2012 NFL season finds the Arizona Cardinals undefeated at 3-0! The early success has Arizona excited and the rest of the nation paying attention. Crew West inc. was recently contacted by Inside the NFL, for a live talk back with Coach Whisenhunt, to discuss the Arizona Cardinals recent success and other topics from around the league. Inside the NFL is a weekly sports show that focuses on the National Football League. The show originally aired on HBO from 1977 through 2008. After Super Bowl XLII, HBO announced that it would no longer be airing the program, but thankfully it was picked up by the Showtime network where it now airs weekly.
Crew West inc., transformed a simple interview room, at the Arizona Cardinals training facility, into a mobile studio. Broadcasting in HD1080 using the Crew West Panasonic HDX900, the shot went off flawlessly.