Crew West was on hand at Jobing.com Arena with NBC Sports for their show, “NHL Live” shooting their interview with former Team USA hockey player, Mike Eruzione. Eruzione was the captain of the US National Hockey Team and scored the game-winning goal against the Russians in the “Miracle on Ice” at the 1980 Winter Olympics in Lake Placid. In addition to lighting Eruzione, we also used an American flag and authentic 1980 USA jerseys for the background. We also handled audio production and with the help of a suburb staff at Jobing.com Arena, had a flawless transmission. The interview look ended up getting rave reviews from everyone at NBC Sports, and later that night other 1980 teammates of Eruzione joined him in sending the 2014 US National hockey team off to Russia in what was a very special night for the Phoenix Coyotes and the entire hockey world. 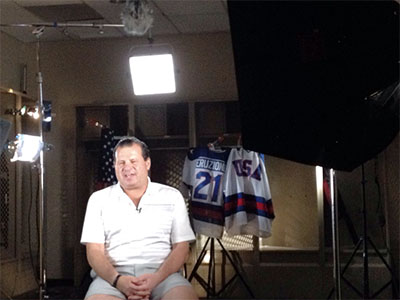