The Arizona Cardinals are gearing up for their 2014 season, starting with Organized Team Activities, or OTAs. Crew West was on hand this week for 4 days, covering outdoor practices and press conferences as well as shooting the starting lineup introductions that will air during the game. We built a full mobile studio with a green screen backdrop for NBC and shot player introductions for when the Cardinals’ play on NBC Sunday Night Football this year. We also built 2 full mobile studios for CBS, one with a green screen and one with a black screen, and used a full sensor Sony F55 with an Agineaux 25-250mm cinema lens to shoot player introductions and promotional videos. 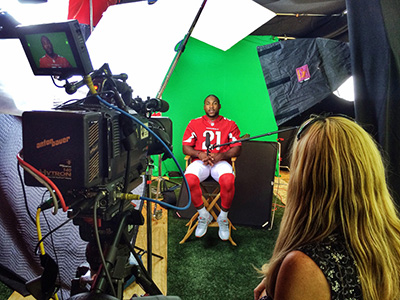