Crew West teamed up with MLB Network today at the Chicago Cubs spring training facility in Mesa, Arizona to shoot for the upcoming show: Play Ball. Sean Casey was on camera with Anthony Rizzo for the half-hour show. I found this shoot to be different than other shoots I’ve been on because we didn’t have to set up equipment a few hours prior. Instead, this was considered as a ‘laid back’ shoot. Crew West’s talented cameraman Andy Patterson was alongside a camerman from MLB while Sean was interviewing Anthony Rizzo on one of the baseball fields. Shortly thereafter, Sean stayed on the field with Rizzo while he was doing drill demonstrations for the show. While this was happening, fans were behind the gates hoping to get Anthony Rizzo’s attention. This was an exciting sight to see because we were outside all morning, fans were all around, and of course, the weather was beautiful. On top of that, I experienced one of the best photo bombs I’ve ever seen in a photo that was taken of me.
-written by ASU intern Delaney Wood 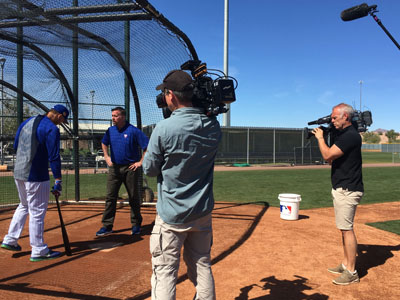 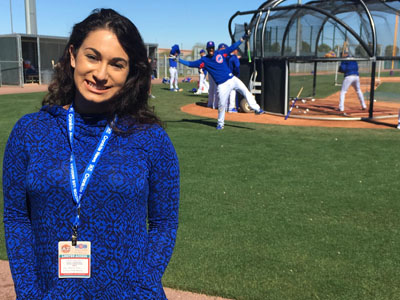