Mountains, a resort, and sunrise seem to be a perfect combination for any relaxing weekends. Yet, under such a beautiful scene, trucks, light stands, and cameras are the actual theme for starting a new day, especially at 4 a.m. in the morning. The shoot was a scripted read with a teleprompter and a dolly move using a Fisher dolly. About four lights were set up including K5600 HMIs, and a 1200 watt Arri with fresnel glass. The day continued at the Mesa-Phoenix Airport Able Engineering aircraft factory. When we arrived at the factory, a giant American flag hung on a wall in the warehouse, so our Director of Photography, Jim Farrell, decided to take the advantage of the flag to show Mr. Ducey in the foreground interacting with factory workers and the flag as a backdrop. After 7 hours of shooting, the crew went to a Tax-income store in Phoenix and Basis School in North Scottsdale for another 6 hours of shooting. By 6:00 pm, primary shooting was finally done after 14 hours. While long, it was definitely a great day of shooting and production. Check out our final products on various television outlets showing Doug Duecy’s campaign for governor. 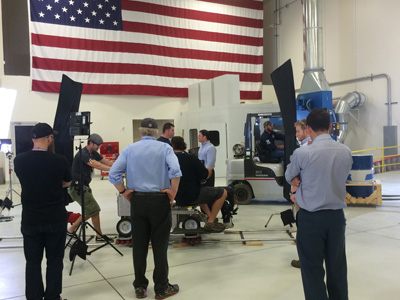