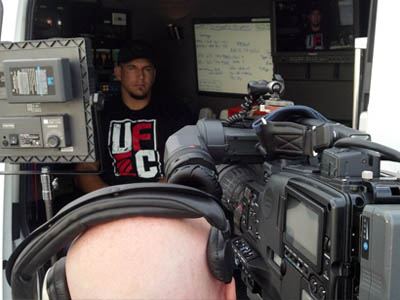 Satellink West’s uplink truck was turned in to a mobile studio when HD Net hired us to do a live talkback with MMA Fighter Frank Mir. This interview was supposed to take place from inside a Las Vegas Gym, but when the doors to that facility were locked, Satellink Truck Engineer Bob Eichenberger with some quick thinking turned the Sprinter in to a mobile studio. It was the only viable option since the gym was located in an industrial complex, next to a five lane road, across the street from North Las Vegas Airport, and the wind was blowing around 30 MPH. Mir appeared live during HD Net’s Inside MMA show. He showed up 5 minutes before his interivew, and was gone right after the interivew concluded. Repoter Mike Schiavello did a live hit from inside the satellite truck as well.